Supreme Court Decision is a Big Win for “Dreamers” 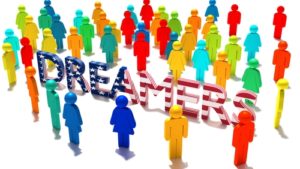 The Supreme Court rejected the Trump Administration’s efforts to dismantle legal protections for undocumented immigrants who came into the U.S. as children. These individuals – most commonly referred to as “dreamers” – are celebrating a victory as they can remain protected from deportation. Learn more about DACA and the Supreme Court decision below.

DACA, otherwise known as Deferred Action for Childhood Arrivals is a program that allows recipients temporary protection from deportation and authorization to work in the United States. Since its inception in 2012 by former President Barack Obama, DACA has had more than 700,000 members be approved for the program. These members, or “Dreamers” are individuals who grew up in the United States and in many cases, only speak English and identify themselves as Americans.

In order to be considered for DACA by the U.S. Immigration Department, individuals must have entered the United States before age 16 and have lived in the country since January 15, 2007, according to the U.S. Citizenship and Immigration Services website.

The Supreme Court decision (resulting in a 5-4 vote), ruled to keep these protections in place after the current administration fought to push for their removal. The Trump Administration has held firm that they believe DACA is illegal, however, the Department of Homeland Security has continued to process two-year DACA renewals so that individuals are protected well into 2022.

Chief Justice John Roberts – the swing vote in the landmark decision – stated that the government failed to give a reasonable justification for ending the program. He went on to claim that while he didn’t believe it was necessarily unconstitutional for the current administration to try and end DACA, the approach to doing so was problematic. Roberts’ decision was also joined by Justices Elena Kagan, Sonia Sotomayor, Ruth Bader Ginsburg and Stephen Bryer.

The Supreme Court decision comes on the heels of another historic ruling given Monday, June 15th that made it illegal for employers to discriminate against individuals for their sexual orientation and gender identities.